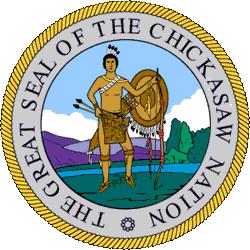 The Chickasaw (/ˈtʃɪkəsɔː/ CHIK-ə-saw) are an indigenous people of the Southeastern Woodlands. Their traditional territory was in the Southeastern United States of Mississippi, Alabama and Tennessee. Their language is classified as a member of the Muskogean language family. In the present day, they are organized as the federally recognized Chickasaw Nation.

Sometime prior to the first European contact, the Chickasaw migrated from western regions and moved east of the Mississippi River, where they settled mostly in present-day northeast Mississippi, Alabama, and into Lawrence County, Tennessee. That is where they encountered European explorers and traders. They had interaction with the French, English and Spanish during the colonial years. The United States considered the Chickasaw one of the Five Civilized Tribes of the Southeast, as they adopted numerous practices of European Americans.

Resisting European-American settlers encroaching on their territory, they were forced by the US to sell their country in the 1832 Treaty of Pontotoc Creek and move to Indian Territory (Oklahoma) during the era of Indian Removal in the 1830s.

Most of their descendants remain as residents of what is now Oklahoma. The Chickasaw Nation in Oklahoma is the 13th largest federally recognized tribe in the United States. Its members are related to the Choctaw and share a common history with them. The Chickasaw are divided into two groups (moieties): the Impsaktea and the Intcutwalipa. They traditionally followed a kinship system of matrilineal descent, in which inheritance and descent are traced through the maternal line. Children are considered born into the mother’s family and clan, and gain their social status from her. Women controlled some property and hereditary leadership in the tribe passed through the maternal line.