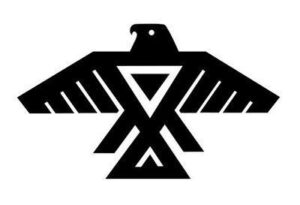 The Ojibwe, Ojibwa, Chippewa, or Saulteaux are an Anishinaabe people of Canada and the northern Midwestern United States. They are one of the most numerous indigenous peoples north of the Rio Grande. In Canada, they are the second-largest First Nations population, surpassed only by the Cree. In the United States, they have the fifth-largest population among Native American peoples, surpassed in number only by the Navajo, Cherokee, Choctaw and Sioux.

The Ojibwe people traditionally speak the Ojibwe language, a branch of the Algonquian language family. They are part of the Council of Three Fires and the Anishinaabeg, which include the Algonquin, Nipissing, Oji-Cree, Odawa and the Potawatomi. Historically, through the Saulteaux branch, they were a part of the Iron Confederacy, joining the Cree, Assiniboine, and Metis.

The Ojibwe are known for their birch bark canoes, birch bark scrolls, mining and trade in copper, as well as their cultivation of wild rice and maple syrup. Their Midewiwin Society is well respected as the keeper of detailed and complex scrolls of events, oral history, songs, maps, memories, stories, geometry, and mathematics.

The Ojibwe people underwent colonization by European-descended Canadians. They signed treaties with settler leaders, and many European settlers inhabited the Ojibwe ancestral lands.