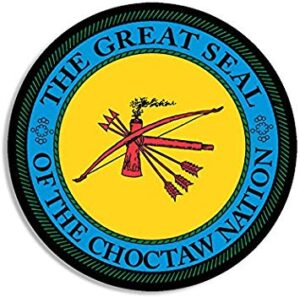 They are believed to be descended from the peoples of the Hopewell and Mississippian cultures, who lived throughout the east of the Mississippi River valley and its tributaries. About 1,700 years ago, the Hopewell people built Nanih Waiya, a great earthwork mound in what is present-day central Mississippi. It is still considered sacred by the Choctaw, who regained control of the site in 2008. The anthropologist John Reed Swanton suggested that the Choctaw derived their name from an early leader. Henry Halbert, a historian, suggests that their name is derived from the Choctaw phrase Hacha hatak (river people).

​​The early Spanish explorers of the mid-16th century in the Southeast encountered Mississippian-culture villages and chiefs. The Choctaw coalesced as a people in the 17th century, and developed three distinct political and geographical divisions: eastern, western and southern. These groups sometimes formed distinct, independent alliances with European powers, including the French, based on the Gulf Coast and in Louisiana Territory; the English of the Southeast; and the Spanish of Florida and Louisiana during the colonial era. During the American Revolution, most Choctaw supported the Thirteen Colonies’ bid for independence from the British Empire. They never went to war against the United States, but were forcibly relocated in 1831–33 as part of Indian Removal, in order for the US to take over their land in the Southeast for development by European Americans.

In the 19th century, prior to removal, European Americans classified the Choctaw as one of the “Five Civilized Tribes” because they adopted numerous practices of their United States neighbors. The Choctaw and the US agreed to nine treaties. By the last three, the US gained vast land cessions; they removed most Choctaw west of the Mississippi to Indian Territory, sending them on a forced migration far from their homelands. The Choctaw were the first Native American tribe to relocate under the Indian Removal Act. Some US leaders believed that by reducing conflict between the peoples, they were saving the Choctaw from extinction. The Choctaw negotiated the largest area and most desirable lands in Indian Territory. Their early government had three districts, each with its own chief, who together with the town chiefs sat on their National Council. They appointed a Choctaw Delegate to represent them to the US government in Washington, DC.

By the 1831 Treaty of Dancing Rabbit Creek, those Choctaw who chose to stay in the newly formed state of Mississippi were to be considered state and U.S. citizens. They were one of the first major non-European ethnic groups to be eligible for U.S. citizenship. Article 14 in the 1830 treaty with the Choctaw stated Choctaws may wish to become citizens of the United States under the 14th Article of the Treaty of Dancing Rabbit Creek on all of the combined lands that were consolidated under Article I from all previous treaties between the United States and the Choctaw.

During the American Civil War, the Choctaw in Oklahoma and Mississippi mostly sided with the Confederate States of America. The Confederacy had suggested to its leaders that it would support a state under Indian control if it won the war.

The Choctaw in Oklahoma struggled to build a nation. They relocated the Choctaw Academy there and opened an academy for girls in the 1840s. In the aftermath of the Dawes Act in the late 19th century, the US dissolved tribal governments in order to extinguish Indian land claims in the territory. This was believed integral to assimilating the people, as well as preparing the Indian and Oklahoma territories for statehood in 1907. From that period, the US appointed chiefs of the Choctaw and other tribes in the former Indian Territory.

During World War I, Choctaw soldiers served in the U.S. military as the first Native American codetalkers, using the Choctaw language. After the Indian Reorganization Act of 1934, the Choctaw reconstituted their government. The Choctaw Nation kept their culture alive despite years of pressure to assimilate.

The Choctaw are the third-largest federally recognized tribe. Since the mid-20th century, they have created new institutions, such as a tribal college, housing authority, and justice system. Today the Choctaw Nation of Oklahoma, the Mississippi Band of Choctaw Indians, and the Jena Band of Choctaw Indians are the federally recognized Choctaw tribes. Mississippi also recognizes another band, and smaller Choctaw groups are in Louisiana, Alabama, and Texas.

The Alabama Choctaw are federally recognized under 24 C.F.R 1000 and 25 U.S.C. 4101, called the Native American Housing Self-Determination Act of 1986 (formerly the “Indian” Housing Act of 1937). The US government holds the MOWA Choctaw Indian Reservation in trust as a reservation for the MOWA Band of Choctaw Indians.

The MOWA Band of Choctaw Indians in Alabama and the Alabama Inter-Tribal Council, composed solely of non-federally recognized tribes under Chief Framon Weaver, obtained a US Supreme Court ruling that sovereign immunity not only applies to entities such as the Alabama Inter-Tribal Council as an arm of the tribe, but is inherent to and possessed by Indians because they are Indians. This decision of the U.S. Federal Court of Appeals was upheld by the United States Supreme Court in 2002.