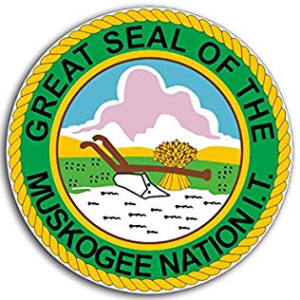 The Muscogee, also known as the Muskogee, Muscogee Creek, Creek and the Muscogee Creek Confederacy, or Mvskokvlke (pronounced [məskógəlgi]) in the Muscogee language, are a related group of indigenous peoples of the Southeastern Woodlands. Their original homelands are in what now comprises southern Tennessee, all of Alabama, western Georgia and part of northern Florida.

Like the Cherokees in northeastern Alabama, most of the Muscogee people were forcibly relocated from their original lands in the 1830s during the Trail of Tears to Indian Territory (now Oklahoma). Some Muscogee fled European encroachment in 1797 and 1804 to establish two small tribal territories that continue to exist today in Louisiana and Texas. Another small branch of the Muscogee Creek Confederacy managed to remain in Alabama and is now known as the Poarch Band of Creek Indians.

A large population of Muscogee people moved into Florida between roughly 1767 and 1821 and these people intermarried with local tribes to become the Seminole people, thereby establishing a separate identity from the Creek Confederacy. Muscogee people in these waves of migration into Florida were fleeing conflict and encroachment by European settlers. The great majority of Seminoles were also later forcibly relocated to Oklahoma, where they reside today, although the Seminole Tribe of Florida and Miccosukee Tribe of Indians of Florida remain in Florida.

The respective languages of all of these modern day branches, bands and tribes, except one, are all closely related variants called Muscogee, Mvskoke and Hitchiti-Mikasuki, all of which belong to the Eastern Muskogean branch of the Muscogean language family. All of these languages are, for the most part, mutually intelligible. The Yuchi people today are part of the Muscogee (Creek) Nation but their Yuchi language is a linguistic isolate, unrelated to any other language.

The ancestors of the Muscogee people were part of the Mississippian Ideological Interaction Sphere, who between AD 800 and AD 1600 built complex cities and surrounding networks of satellite towns (suburbs) centered around massive earthwork mounds, some of which had physical footprints larger than the Egyptian pyramids. Some Mississippian city populations may have been larger than later colonial European-American cities. Muscogee Creeks are associated with multi-mound centers such as the Ocmulgee, Etowah Indian Mounds, and Moundville sites. Mississippian societies were based on organized agriculture, transcontinental trade, copper metalwork, artisanship, hunting, and religion. Early Spanish explorers encountered ancestors of the Muscogee when they visited Mississippian-culture chiefdoms in the Southeast in the mid-16th century.

The Muscogee were the first Native Americans officially considered by the early United States government to be “civilized” under George Washington’s civilization plan. In the 19th century, the Muscogee were known as one of the “Five Civilized Tribes”, because they were said to have integrated numerous cultural and technological practices of their more recent European American neighbors. In fact, Muscogee confederated town networks were already based on an (at minimum) 900-year-old history of complex and well-organized farming and town layouts.

Influenced by Tenskwatawa’s interpretations of the 1811 comet and the New Madrid earthquakes, the Upper Towns of the Muscogee, supported by the Shawnee leader Tecumseh, actively resisted European-American encroachment. Internal divisions with the Lower Towns led to the Red Stick War (Creek War, 1813–1814). Begun as a civil war within Muscogee factions, it enmeshed the Northern Creek Bands in the War of 1812 against the United States while the Southern Creeks remained US allies. General Andrew Jackson then seized the opportunity to use the rebellion as an excuse to make war against all Muscogee people once the northern Creek rebellion had been put down with the aid of the Southern Creeks. The result was a weakening of the Muscogee Creek Confederacy and the forced cession of Muscogee lands to the US.

During the 1830s Indian Removal, most of the Muscogee Confederacy were forcibly relocated to Indian Territory. The Muscogee (Creek) Nation, Alabama-Quassarte Tribal Town, Kialegee Tribal Town, and Thlopthlocco Tribal Town, all based in Oklahoma, are federally recognized tribes, as are the Poarch Band of Creek Indians of Alabama, the Coushatta Tribe of Louisiana, and the Alabama-Coushatta Tribe of Texas. Seminole people today are part of the Seminole Nation of Oklahoma, Seminole Tribe of Florida, and the Miccosukee Tribe of Indians of Florida.